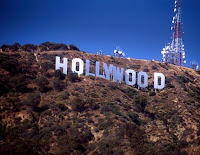 Today, I'm re-posting another TLCG greatest hit, all about confidence in a writer's life. I'm not saying you have to move to LA to find confidence, but you could learn a few things from a some of those Angelinos.

I love Los Angeles. Home to some of the most intelligent, creative, imaginative, passionate, enterprising artists and thinkers (yes, this is still L.A. I’m talking about), you can’t help but feel the positive buzz around you. No matter where you are, Hollywood, Santa Monica, the Palisades, or even the Valley, artists and writers are producing their product. They’re sharing thoughts, giving feedback, connecting, and channeling their passion for writing toward making it happen. They know they’re in a city that expects to be entertained, expects to be enlightened, and they’re ready to give it to ‘em! I must warn you, though. If you’re gonna show up on L.A.’s doorstep with a dream, not only had you better have a good plan, but you better pack your confidence.

Learn From the Master

When Steven Spielberg graduated high school, he took an unpaid job as an assistant at Universal Studios. Fueled by passion and the realization he better get the most out of his time on the set, Spielberg left his outlined sphere and ventured to each and every lot on the set every day for several months. Wearing an understated dark suit with briefcase in tow, he got to know people, absorbed techniques and felt what it was like to make movies. This was what he had most wanted since he was a child. He dressed the part, thought the part and felt the part. The rest is Hollywood history.

Some would call Spielberg’s moves ballsy; you gotta pay your dues to make it to the next echelon. I say he had a level of audacious confidence anyone aspiring to make it in the arts and letters needs to have. This is the confidence you need to possess in order to create, to complete and to sell. And to sell and sell, sell, sell, making your passion for writing a viable career. It takes work. It takes acting as though you already have what you most want.

This isn’t the law of attraction. This isn’t about wishing really hard for something to happen and then following up those wishes with a few good weeks worth of positive thinking only to be left with an occasional good parking space and a shorter wait in line at the bank. If that were the case, I’d have been living my super fabulous pink life in my Barbie Penthouse when I was 7. This is about immersing yourself, mind, soul and even body into the thing you want most – the successful writer’s life. What does that look like? It looks like you acting on your intentions. I recently advised a brilliant writer to quit grabbing snatches of time to jot down good ideas and write, already! She left our conversation with palpable excitement and committed to me she was going to do it! That night, she forwarded me her work, which was an inspired first draft of a beautiful children’s story. Step one, finished. Yes!

Without action, your dream will stay a dream. Without confidence, someone else will show up in their suit and briefcase looking and feeling the part until they are. Don’t get me wrong, there are plenty of bon mots to go around. Plenty of success to be shared, but I want YOU to make it happen. Nothing would make me happier.

Your exercise this week:

Think of how you will feel when you get picked up by the agent of your dreams. Think of how awesome it’ll be when you connect with your inspired editor at the fabulous publishing house that just acquired your novel or nonfiction book. Imagine how thrilled you’ll be when a magazine or newspaper offers you a regular column, syndicated even! Why not? Let these gooey, happy thoughts sink in. Let this energy move you into action fueled by audacious confidence so that feeling will one day be reality.

Have a great, productive week, writers!
Posted by Erin Reel

Email ThisBlogThis!Share to TwitterShare to FacebookShare to Pinterest
Labels: confidence in a writer's life