Clarity in This Writer's Life: A Blogshop with Margo Candela

Clarity doesn't necessarily bring ease. Sometimes knowing exactly what path to take and actually taking it bring fear, anxiety and many challenges - but in the end it was all worth it.
Notable Los Angeles author Margo Candela shares when it became clear her next steps in publishing would lead her down a path she'd never taken and how she made the best choices for her book along the way. 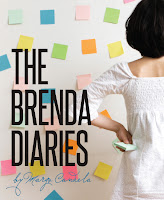 Very rarely has clarity hit me all at once except when it does. Sometimes it’s good. Like, while in the middle of shampooing my hair, I’ll figure out how to untangle a plot point or the perfect name for a character will come to me. Sometimes the obvious is a lot harder to accept even though I’ve had lots of time to accept it as inevitable.
Earlier this year, my editor told me I’d have more success if I self-published my fifth novel, The Brenda Diaries. We’d had many conversations lamenting how traditional publishing was changing directly under our butts. While neither of us was willing to predict what state publishing would be a year from then, it was clear that I had reached that much talked about fork in the road.
After a couple of days of moping, I came to the conclusion that I had no choice but to pick a fork. I decided to take my editor’s advice and go it alone knowing full well that not only would I have to do the writing, but I’d have to see a manuscript through every step of the way—from initial idea to loading html code at midnight on publishing day.
Funny enough, almost instantly, I felt like as if a weight had been lifted off of me. It was like one of those overdue break-ups where the long, slow trek to it is actually worse than life afterwards because you realized that while you’re fully broken-up, you’re not broken.
I also realized that I needed help to make anything happen. Ideas are great, everyone has them, but turning an idea into a book is a whole other enchilada. As someone who hates asking for favors, this was the hardest part. But it was clear to me that if I didn’t ask for help, I was going to fail. The fear of failure forced me to get over my reluctance and showed me how very lucky I am.
My dear friend Ruby saved my grammatically challenged butt by serving not only as my copy editor but general sounding board. Rocio, my talented graphic designer, didn’t fire me as a client after it took almost a dozen tries to get the cover right. Thousands of strangers also played a part, following Brenda (@BrendaDiaries) on Twitter, and cheering her on through bad temp jobs and breakups.
I’m not sure what’s going to happen, but one thing is perfectly clear to me now—I’m certainly not in this alone.
About the Contributor
Margo Candela is the author of Good-bye To All That (Touchstone, July '10), More Than This (Touchstone, Aug '08), Life Over Easy (Kensington, Oct '07) and Underneath It All (Kensington, Jan '07).  More Than This was a Target stores Breakout Book and an American Association of Publishers national book club selection. Good-bye To All That (Touchstone, July '10) was the only novel picked by Los Angeles Magazine for its 2010 Best of L.A. list. Her latest, The Brenda Diaries (SugarMissile, Oct. '11), is the first in a series.