Flashback Friday: Goals in This Writer's Life with Michelle Hoover 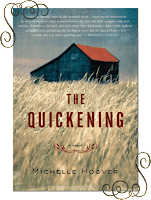 I'm often asked time-frame questions from writers:How long does it take to find an agent? How long does it take to make a book deal? How long will it take before I can start living off my writing? My answer to all of these questions is usually the same - anywhere from a week to several years....followed by, what's your hurry? Yeah, yeah, I hear the stories about the writers who've found success seemingly overnight. Good for them, I say! But folks, they are the exception.

In Michelle Hoover's case, it took 14 years to finish one novel and find an agent. Through that decade (and then some), she dug into her craft, faced the reality of creative sacrifice and found within the stamina only seasoned marathon runners access to create something truly noteworthy, her novel The Quickening.


Michelle's Midwestern stick-to-it-ness impressed me, so I had to ask her:
"You spent several exhaustive years crafting and re-shaping The Quickening (Other Press). Did you start the process with a goal in mind or did you take it day by day? How important has setting goals in your writer's life been to your overall success?"
MH: I am a very goal-oriented writer. Since I run my life on an academic schedule, I set 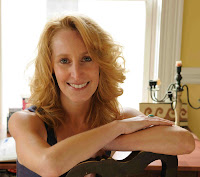 deadlines for the end of December, April, and August. But in truth one’s goals don’t always take into consideration one’s limitations, especially when a writer is young. Through high school and college, I had several teachers tell me I should write. But when I started The Quickening at twenty-three, I had far more chutzpah than know-how. I planned to have my first novel under contract before I finished graduate school, to have a second book on the shelves by the time I hit thirty. Even typing these sentences now curls my fingers. Not only did I imagine these things possible, I believed I must accomplish them in order to matter as a writer at all.

This kind of thinking is common for young twenty somethings, but it is also endemic to our society. When compared to other countries, American high school graduates rate relatively low for skills in math, science, and writing, but they top the charts when it comes to confidence. The gap between skill and will is alarming, and it doesn’t necessarily narrow with age. My own focus on end-goals—publication and authorhood—over process—a good day’s work creating flesh and blood—likely delayed my novel for years.
TLC: Great point, Michelle. While I will be the first to say Confidence in a writer's life is so important, it's a virtue I coach, the craft MUST be there. That said, traditionally the more literary or midlist works do take longer to find their way to a publisher than your more straight-forward nonfiction titles. Take time to develop your skill, writers. There is NO hurry to publish, unless you've got something very timeworthy you can belt out in a matter of days (only the seasoned, platformed writers need apply).

MH: Are goals more a hindrance than a help? Of course not. My Virgoian self still makes lists of deadlines, but more out of an attempt to control chaos than anything else. Instead of not making goals, make the right kind:

We fight to learn how to write our entire lives. But think how successful you will feel if you attempt something more meaningful than counting words. After all, you’re writing a book, not a grocery list.
Ignore the applause
Get a giddy feeling after completing that first draft? You and everybody else. Writers need to feign genius in order to convince themselves they should write at all. But then they need to get over it. Reach that goal of 50,000 words for NaNoWriMo? Congrats! Have you written a novel? No! Get over yourself and get back to work. You’ll save yourself years if you keep a lid on your desire for adulation and focus on true accomplishment.
TLC: Writers, truly you need to feel good about your accomplishments. You should feel totally elated after finishing your first or last draft. Everyone needs a pat on the back, but as Michelle says, get back to work...you're not finished yet, my dears.

Be willing to fall backward to move forward
Take yourself seriously enough to realize that sacrifice is a part of growth. We writers avoid making necessary revisions because they require more work than we believe we can handle, cutting tens even hundreds of pages that took years to hone. The time you’ve spent working makes no difference to the amount of work you have ahead. Your upcoming fiftieth birthday doesn’t matter either (except for the cake). The final product is what counts. Once you get over your hurt feelings about the time you’ve lost, you might just realize that you’ve gifted yourself and your book the air and energy to forge ahead. And in truth, you needed to complete that lost writing in order to understand that you didn’t need to do it at all.

TLC: Right! Everyone gets off track once in a while. If this happens, have your mini-pity party and then get back on track, already! There is nothing more deadly to some quality creative time, not to mention forward movement, than self-loathing. Doesn't that seem like a supreme waste of time? What is there to learn? Nothing, that's what!
If you've fallen by the wayside of your goal, simply refocus your energies where they are better spent - on reaching your goal, piece by piece.
Your Action: Understand this path to publication is not a race; create your goals with this in mind. Be flexible in your plans - if you find you need more education, time or experience to make your work sing, by all means allow it - no matter how long it takes. Just keep moving forward even though it may seem like you're taking two steps back.
About the Contributor
Michelle Hoover teaches writing at Boston University and Grub Street. She has published fiction in Confrontation, The Massachusetts Review, Prairie Schooner, StoryQuarterly, and Best New American Voices, among others. She has been a Bread Loaf Writer's Conference scholar, the Philip Roth Writer-in-Residence at Bucknell University, a MacDowell fellow, a Pushcart Prize nominee, and in 2005 the winner of the PEN/New England Discovery Award for Fiction. Her debut novel, The Quickening, was released in June and has been shortlisted for the Center for Fiction's 2010 Flaherty-Dunnan First Novel Prize
Posted by Erin Reel