High Concept: Propelling Your Manuscript Toward Publication - A blogshop with author Darynda Jones 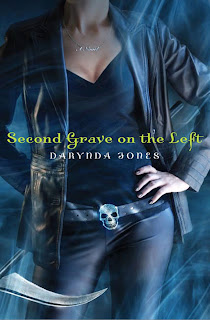 When it comes to pitching your book to agents, editors and the book selling and buying public at large, clarity has always been the deciding factor as to what gets through the slush pile to an agent's desk, to an editorial board meeting and passed from the hands of a bookseller to a book buyer. When it comes to pitching your commercial novel or series, a clear, concise pitch (along with killer writing and maybe a healthy author platform) may be your ticket to representation and a book deal. What does that look like, exactly? About 25 words or less; it's called High Concept.  And this week, author Darynda Jones (SECOND GRAVE ON THE LEFT,St. Martin's Press) is here to share what High Concept is all about.
What High Concept Is:
The term High Concept is used to refer to an artistic work that can be easily described by a succinctly stated premise. For writers, high concept is a short idea or premise, 25 words or less, that can be used to describe a story or manuscript. It is the writer’s work broken down into its most basic, culturally accessible elements.
It’s not just a marketing gimmick. It is a staple of great commercial fiction. The industry loves high concept stories, everyone from agents and editors to booksellers and librarians, but that’s because fresh, catchy ideas are easier to pitch and sell.
In today’s market, learning to create and communicate an effective high concept idea will increase exponentially your chances of surviving in this business long-term. And that’s what it’s all about, doing what we love and doing it for a long time.
High concept should:
·         Be easily understood
·         Summarize an entire manuscript in one to two sentences
·         Intrigue your audience
·         Introduce conflict
·         Be fresh and marketable
·         Reflect the genre and subgenre of the story
·         Invoke an emotional response
So, what can high concept do for you?
First of all, it can catapult your manuscript out of the slush pile. A unique idea that grabs the reader instantly will be like giving your manuscript wings. Second, it can not only generate interest from agents and editors, but also bookseller, librarians, and readers. Third, it can create industry buzz and is, in fact, the most obvious and accessible route to do so.
What High Concept is NOT:
Specifically, high concept is not simply a comparison of two movies, books or characters, though these can certainly be utilized in a writer’s pitch or blurb. It should never make a reader say, “I don’t get it.” Something like ‘Jaws meets Star Wars’, for example, might leave your audience scratching their heads.
And this is tricky, because what if you use a book, movie or character the editor you’re trying to impress has never heard of? You can say your manuscript is ‘Lucky Number Slevin meets Catfish’, but why would you? The last thing your pitch should do is create confusion.
How is high concept utilized?
Anytime a high concept idea is used in a pitch or as a selling tool, the premise should be easily and universally understandable within the cultural perimeters of the targeted demographic. Namely, it should bring the plot concept to light in the fewest words possible. It should make a connection in the recipients mind to an interesting and universally understandable concept. And at its best, it should evoke strong emotion.
What does an effective use of high concept accomplish?
An effective use of High concept avoids the risk of alienating audiences with a convoluted or overly taxing plot exposition. It is the story in its simplest form, creating an instant understanding of the plot or concept of a story. It can also convey a sense of the writer’s voice and/or writing style. If your voice is humorous, use that in your pitch.
Examples of high concept in film and literature:
TLC: While clarity is always good, not every novel is suitable for a high concept pitch. Literary novels are not high concept material...well, at least not in that way, although, it may help you literary or upmarket fiction authors to try to boil down your plot to 25 words or less for the sake of pitching clarity. Again, that doesn't mean you have a high concept novel, but the exercise might help you organize your pitch.
Your action: Is your novel high concept? Think about what Darynda shared with you and try to boil down the premise of your novel to 25 words or less. Even you literary writers should give it a shot.
For more on pitching and query letters, see this post from last week.
Here's to your clarity, writers!


TLC
About the Contributor

Winner of the 2009 Golden Heart® for Best Paranormal Romance for her manuscript FIRST GRAVE ON THE RIGHT, Darynda Jones has sold six books to St. Martin’s Press in two three-book deals. Her latest book, SECOND GRAVE ON THE LEFT, just came out in August. She lives in New Mexico with her husband and two beautiful sons, the Mighty, Mighty Jones Boys. www.daryndajones.com.
Posted by Erin Reel